It all begins with crude oil and natural gas (mixtures of hydrocarbons and small amounts of impurities found in many areas of the world in varying quantities and compositions). They were formed millions of years ago as a result of slow and long processes from decayed plants and animals, buried deep into the earth’s crust under tremendous pressure.

Crude oil and natural gas are extracted from the ground, on land or under the oceans, by sinking an oil well. They are then transported to refineries, by ship and/or by pipeline, a line equipped with pumps, valves and various other control devices especially adapted for moving liquids and gases.
The purpose of refining and then petrochemistry is to convert these natural raw materials into daily life products with applications going from drugs to computer ships, telecommunications, textiles, cosmetics, transport and construction.

1st phase / Refinery: production of physical and chemical changes in crude oil and natural gas, through an arrangement of extremely specialised manufacturing processes.
One of these processes is distillation, i.e. the separation of heavy crude oil into lighter groups of hydrocarbons called « fractions ». Two of these fractions are familiar to consumers. One, fuel oil, is used for heating or for diesel fuel in automotive applications. Another one is naphtha, used in gasoline and also as the primary source from which petrochemicals are derived.

2nd phase / Petrochemistry: aims at converting some of the distillation fractions (raw materials known as feedstocks) into marketable petroleum products. It is made up of three different types of « downstream » processes which change the molecular structure of hydrocarbons :

Once these operations are concluded, new products are obtained, the building blocks of the petrochemical industry

These products are finally processed into other, more specialised products that will be present at the end in plastics, soaps, detergents, healthcare products, synthetic fibres, rubbers, paints…

« The main causes of accidents are the chemical splashes which can occur for instance when a pipe or a tank bursts under pressure or during disassembling operations of pipes or valves. »

Even if it would be impossible to detail all the petrochemical processes and thus establish a complete list of the chemical risks encountered in this industry, some well known refining / petrochemical operations involve the use of various chemical products:

Alkylation: the purpose of alkylation is to yield high-quality motor fuel blending.
The process involves low-temperature reaction conditions conducted in the presence of strong acids. In the alkylation unit, Hydrofluoric acid (HF) (use estimated at more than 75% there) or  Sulfuric acid (H2SO4) (use estimated at nearly 20% there) is used as a catalyst.
Potassium hydroxide (KOH) is also used for further treatments at the end of the hydrofluoric acid alkylation process.

Base oil production: lubricants are a blend of different grades of base oils and special additives. Depending on the stage involved, the production process of base oil can involve the use of various solvents such as phenol, toluene, methyl ethyl ketone (MEK), methyl isobutyl ketone (MIBK), chlorinated hydrocarbons…

Cooling: in a refinery, cooling is required to allow refinery process operations to take place at the right temperatures and to bring products to their appropriate storage temperature. Refrigeration systems are applied in specific cases and involve the use of a refrigerant like ammonia in the process (case of a direct refrigeration system).

Products treatments: extraction or removal techniques can be set-up to achieve certain product specifications. Amines or caustic soda (NaOH) can be mentionned here : amine scrubbing for removal of hydrogen sulphide and caustic washing for the removal of acids or mercaptans (sulphur derivatives).

Waste water treatment: water is used intensively as process water and for cooling purposes. Process water has been in contact with the process fluids, and apart from oil, will also have taken up hydrogen sulphide (H2S), ammonia (NH3), phenols, benzene, cyanides and suspended solids containing metals and inorganic compounds. The process water is treated in several, well-known steps before dump in the environment.
The chemical risks linked to the presence and use of the agents involved in the refining / petrochemical process must thus be managed during four major stages: production, inspection, storage and maintenance.

Inspection : the accidents which occur then are often due to handling mistakes when testing or analysing the products (collection, dosage…) and sampling.

Storage : the storage includes the following operations : unloading, storing, and transfer of the raw materials. The main source of accident is first of all related to the transfer of chemicals from a container or a tank to another one.

Maintenance : the industrial risks of damage or dysfunction of the equipments lead to perform frequent maintenance operations of the installations. Accidents may be observed during the operations of draining, cleaning, sanitation, and purging.

The main causes of accidents are the chemical splashes which can occur for instance when a pipe or a tank bursts under pressure or during disassembling operations of pipes or valves. 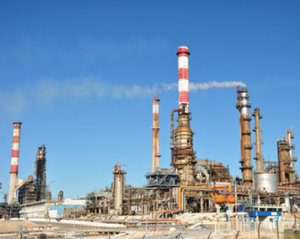 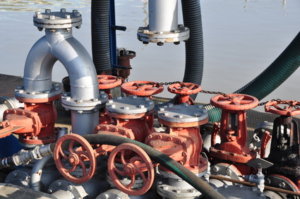 We inform you that we use cookies. By continuing to browse the site when this banner is displayed, you consent to our use of cookies for the purposes stated in our legal notice. You can set your browser to deactivate and/or delete cookies. For more information, please consult the section "How to exercise your choices, depending on the browser you are using?" in our legal notice. I agree