The danger of hydrofluoric acid (HF)

Hydrofluoric acid is a key chemical in many industries, particularly as a surface treatment agent (glass, metals, ceramics, etc.) or as a reaction additive. It is used in many fields of activity, from the production of photovoltaic cells to industrial maintenance in the food industry. Despite the dangers associated with its use, there are few or no substitute products or techniques. This is why its production is growing along with its global demand.

Why are fluoride ions in acidic environment as dangerous as hydrofluoric acid ?

Like the hydrofluoric acid HF, the fluorides in acidic environment generate a dual action which is both:

The destructive action of the acid mainly targets the superficial layers, whereas the fluoride ion does not damage them that much[1]. Then the devastation of these layers allows the HF and the fluoride ions that HF progressively releases to penetrate and to spread into the deepest tissues, resulting in liquefactive necrosis. This specific mechanism differentiates HF from other acids and particularly from strong acids which cause coagulation necrosis with precipitation of the tissular proteins[2].

Please remember : The HF hazard is due to the double presence of H+ and F– in an acidic medium. Any acid can release H+ into the medium – any fluoride can release F–

This is the reason why the chemical substances derived from hydrofluoric acid have a specific classification, with more strict regulations for very toxic products, because there is still a HF hazard even for low concentrations.

Reference for the data in the table : P. Serre, S. Malard, Hydrofluoric acid in aqueous solution. Risks in use in the workplace and preventive measures, Technical Brief, Document INRS ED6223, April 2016.

What is a fluoride in acidic medium ?

It is no more than the presence of H+ and F– ions in the same solution.

For instance, if you mix a strong diacid, such as sulfuric acid H2SO4, with some sodium fluoride, NaF:

Besides, this kind of property is currently used in chemistry to increase the power of chemical stripping.

The hydrofluoric acid is commonly used in the stripping of stainless parts.

Nitrofluoric mixtures, which correspond to a mixture of nitric acid (HNO3) and hydrofluoric acid (HF), can also be used.

Examples of such mixtures commonly used as stripping solutions:

Therefore the medium will be very acidic: with both H+ ions released by HNO3 (and H2SO4, when present in solution) and fluorides in the form of F– or HF.

Please remember: Mixing HF with a strong acid causes a rapid acid burn and thus builds the “entry route” for fluorides, although their “number” is theoretically lower than the number of H+.

How should fluorides in acidic medium be washed ?

Answer: fluorides in acidic medium should be washed like a hydrofluoric acid splash.

For the best results, this is how to achieve an active and efficient washing:

The washing devices using the HEXAFLUORINE® solution match those requirements because of being directly available at the workstation and transportable.

The HEXAFLUORINE® solution acts on the acid and chelates the fluorides. Its hypertonicity allows to remove the chemical aggressor out of the tissues of the eye or skin (phenomenon of osmosis) and thus limits the penetration of HF and its action on tissues.

Please remember: using an active solution such as the HEXAFLUORINE® solution, immediately after a splash, allows to avoid or to reduce the penetration of HF and its action on tissues, and thus restrains the development of the burn and the associated complications. In case of late or insufficient washing, a secondary treatment such as calcium gluconate may be applied, in accordance with the protocol of the medical authority in charge.

Examples of fluorides in acidic medium: 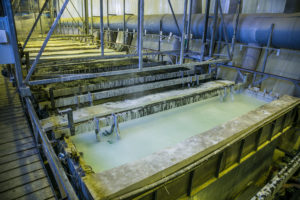 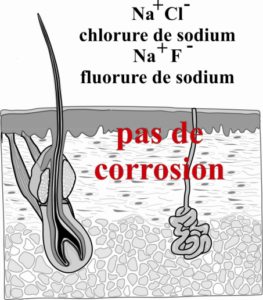 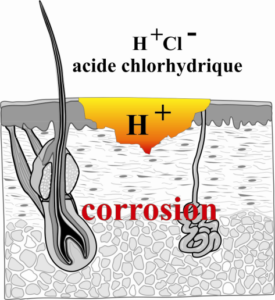 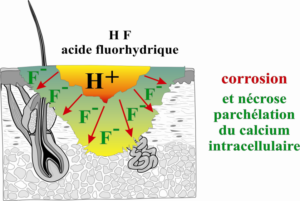