/ The Portal of chemical risk / Chemical Injury / Why speak about “chemical injury” rather than “chemical burn” ?

Why speak about “chemical injury” rather than “chemical burn” ?

Indeed, the injury process and the physiopathology of thermal and chemical accidents are completely different. A distinction thus is essential.

We will leave the term “burn” for thermal injuries, but from now we will speak about “chemical injuries” in cases of accidents caused by irritating or corrosive substancess.

It is much less a semantic whim than an awareness of two different phenomena, requiring two different care managements consequently.

The generated “language mix” by the common term “burn” let believe too long that water, perfect for a “cooling” dissipation of heat, was a universal panacea.

While a thermal aggression matches with a simple calory transfer per radiation and conduction, a chemical aggression involves real molecular reactions. Besides, these reactions differ according to nature of the substance and to its concentration. The lesions generated by an acid are different from those due to a base or those caused by a solvent.

For a burn, therefore a thermal injury, there is only proportionality between the injury’s depth and the temperature as well as the duration. The nature of the hot substance is important only with thermal conduction (boiling water burns the skin more quickly than boiling oil). Besides the exchange coefficient defines the calories speed from the hot body to another less hot… or colder…

If the thermal injury is mainly of physical nature, the chemical injury is essentially really chemical.

Lastly, and for the anecdote, people suffering from stomach ulcer or of oesophagite, speaks usually about “gastric burn” or about “oesophageal burn” because the painful feeling looks like that of a flame which would invade them.

However, these same people know that it is useless to drink fresh water to stop their pain… On the contrary, this pain would still develop.

It is therefore the perfect example of chemical injury due to acidity and that only a pharmacological chemical treatment can stop.

Keep thus water for burns and let us see how to avoid chemical injuries. 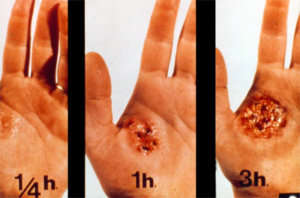 This website complies with European GDPR regulations and uses technical, statistical and functional cookies to improve your experience and save your session. To register an account, contact us or receive our products or services, you must accept our privacy policy. By clicking on the 'Accept' button or by clicking on any link included on this page, you consent to the use of cookies and accept our cookies policy.I agree