A mine is defined as an area of land upon or under which minerals or metal ores are extracted from natural deposits in the earth by any methods, including the total area upon which such activities occur. Mining is the process of digging into the earth to extract naturally occurring minerals.

It can be categorized as:

Surface mining is used to excavate ores at or close to the earth’s surface ; underground and in situ mining both remove minerals from deeper deposits.

This industry also includes initial mineral processing and preparation activities, because processing plants usually operate together with mines or quarries as part of the extraction process.

The production of minerals involves a series of physical and chemical processes.

Methods for physically separating the ore from surrounding material also include complex processes, such as leaching – mixing the ore with chemical solutions or other liquids in order to separate materials.

In many instances, various chemicals and reagents are used in the separation process and often cause consequently irritant or corrosive dermal exposures.

These widely varying concentration processes are collectively referred to as beneficiation. Beneficiation is described as activities that serve to separate and concentrate the mineral values from waste material, remove impurities, or prepare the ores for further refinement.

Many physical properties, among which the affinity for certain chemicals, are used as the basis for separating valuable minerals from gangue.

Chemical separations involve isolating metals and minerals from their ore by chemical processes such as (for the most important ones):

Following beneficiation to concentrate the mineral value, the concentrate is specifically processed to further extract and/or refine the metal, thus preparing it for its final use or for incorporation into physical or chemical manufacturing.

The waste or unwanted minerals (tailings) separated from the valuable minerals, now in concentrated form, are routinely disposed of in a tailings pond near the mine site; the associated water is typically recycled, treated, and used in subsequent mining or processing activities.

Tailings generally contain small amounts of the valuable mineral(s) not completely recovered during beneficiation ; some unwanted or undesirable deleterious minerals; and some of the chemicals that may have been used in the course of the separation process.

Underground mines may use these tailings to backfill mining-created underground voids.

Among the various toxic risks linked to the use or presence of:

Two specific problems can be raised: 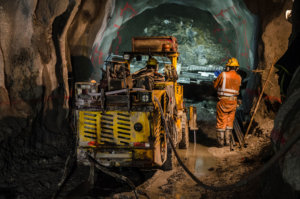