/ The portal of chemical risk / Chemicals / Thioglycolic acid :Understanding the risk of specific chemicals of interest

Thioglycolic acid :Understanding the risk of specific chemicals of interest

Thioglycolic acid can cause severe burns and chemical injuries when it enters in contact with the skin, eye, digestive or respiratory tracts. It is corrosive and can even induce a systemic toxicity.

However, thioglycolic acid is still widely used in domestic products such as depilatory creams and by hairdressers for “perms”. Let’s understand the risk it presents.

Thioglycolic acid is a colorless liquid with a strong, typical mercaptan disagreeable odor (although olfactory fatigue may occur) which is used in cosmetic formulations including permanent wave solutions and depilatories, in pharmaceutical manufacture, and as a stabilizer for vinyl plastics. A recent use is as a capping or stabilizing agent for Cd/Te quantum microdots (QDs). It is a member of the thioglycolate chemical class.

Other names for thioglycolic acid include:

Because of its high reactivity, it is incompatible with air, strong oxidizers, bases, active metals such as sodium, potassium, magnesium, and calcium (for examples).

Thioglycolic acid is a contact irritant or corrosive substance of the eyes, skin, and mucous membranes.

It is known to cause severe skin burns and eye damages. The European Chemical Agency (ECHA) recommends to label it with the H314 risk phrase. (full classification)

In case of cutaneous or ocular exposure to thioglycolic acid, corneal damage and chemical skin injury with blister formation has occurred.

As part of cosmetic formulations, thioglycolic acid has been associated with development of irritant or allergic contact dermatitis, particularly amongst hairdressers exposed chronically.

What to do in case of an exposure to thioglycolic acid?

Thioglycolic acid was not mutagenic in various Salmonella tyhrimurium strains with or without metabolic activation.

There is currently no evidence that thioglycolic acid is a carcinogen. 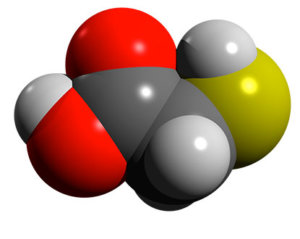