/ The portal of chemical risk / Emergencies / Organization of SAMU in Brazil

Organization of SAMU in Brazil

Objective: to demonstrate the vision of a public service institution focused on chemical emergencies in the region, involving the SAMU.

The SAMU was created in the year 2003 with the goal of minimizing the morbi-mortality in Brazil, and improve the quality of consultations with the aid of medical regulation.

The SAMU derives from the merger of two models of APH (pre-hospital care):

The Brazil presents a large population and geographic diversity, aggregating cultures and varied activities. An example is the city of Cubatão – São Paulo, with around 128 000 habitants, situated between the sea and the mountain, crossed by 4 highways.

The city holds an industrial pole with 28 companies from medium to large enterprise size,with various activities, from fertilizers handling, fuel refinery to metallurgy. Cubatão is located next to South America’s largest port, the port of Santos.

Below is an intervention example in a paper industry, where a victim was accidentally splashed with caustic soda, with injuries in the evolutionary process. The decontamination was immediate and the victim returned to work without sequelae.

Photos 1, 2, 3 and 4, after chemical splashes, around 30 minutes. Before decontamination with DIPHOTERINE® solution.

Photos 5 and 6, one day after decontamination with DIPHOTERINE® solution. Without burns. Working.

The implementation of such specialized ambulances helps new technical knowledge to emerge, to value the capacity of involved professionals to manage chemical risks, and to improve the quality of care to the population. 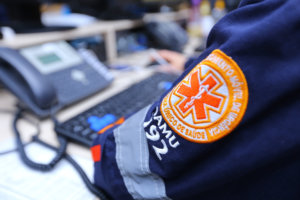 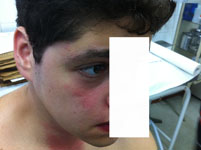 Evolving lesion on the face. A few minutes of the accident.

Lesion in face, neck and thorax

Evolution before decontaminating with the DIPHOTERINE® solution

After decontamination with the DIPHOTERINE® solution, one day. No lesions.

No lesions. One day.