Crotonaldehyde is a colorless or white liquid with a suffocating odor which turns a pale-yellow color on contact with air. It is used as an intermediate for production of sorbic acid and formerly was used in manufacture of n-butyl alcohol. It is formed during fossil fuel combustion.

Other names for crotonaldehyde are:

It is considered to be a Class 1B Flammable Liquid.

Let’s understand the risk it presents.

A little bit of chemistry

Crotonaldehyde has incompatibilities or can react with caustics, ammonia, concentrated oxidizing substances, nitric acid, and amines.

Polymerization may occur at high temperatures, such as in a fire.

It is a colorless or white liquid with a suffocating odor which turns a pale-yellow color on contact with air.

Crotonaldehyde is an irritant of the eyes, skin, and respiratory tract.

Eight cases of industrial injury from crotonaldehyde exposure were reported. The severity of corneal injuries was not reported, but healing was said to occur within 48 hours. No details on the treatment were available.

The European Chemical Agency (ECHA) recommends to label it with the following risk phrases:

What to do in case of an exposure to crotonaldehyde

In experimental animal studies, rats did not survive inhalation exposure to 1,650 ppm for 10 minutes and major lung damage was found. Similar findings occurred in rats when there was exposure to 1,500 ppm for 30 minutes or to 100 ppm for 4 hours.

In 113 weeks drinking water studies in rats, some hepatocellular abnormalities occurred and there were some cancers found. 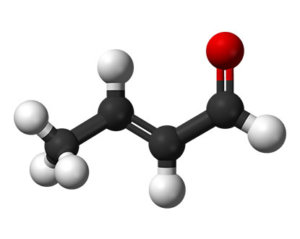 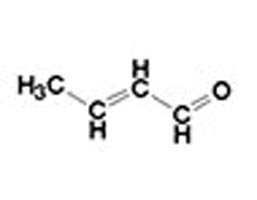